Spring -- A Poem by Margaret

February 02, 2021
Spring Sing a song of growing things, Of new delight that each day brings, And the bird that gladly sings. Sing a song of brightest green, Of flowers that grow so pure and clean, And new beauty so serene. Sing a song of a world made new, That has been reclaimed from winter’s blue, And seems to be made for you.
Post a Comment
Read more

Fall -- A Poem By Margaret

December 17, 2020
Fall My artist’s soul exults In the vibrancy. The death of the leaves is celebrated In the brightest colors. Each step is embedded In the crunch as the leaves crumble Beneath my foot. Soon it will be winter, But for now, Let us rejoice in Fall.
1 comment
Read more

Top Ten Songs to Listen to During Lockdown

November 13, 2020
While in Lockdown, you may be finding that you are getting tired of listening to the same old songs over and over again. If this is the case, then have no fear. We have compiled a list of 10 of our favorite songs that we like to listen to. The genres range from Pop to Classical music, making sure that there is something for everybody, no matter their taste. While not a super long list, it should give you a taste of different artists and allow you to see which ones you like.  Pompeii by Bastille  Don’t Fear the Reaper by Blue Oyster Cult  Chlorine by Twenty-One Pilots Toccata and Fugue in D minor (BWV 565) by J.S. Bach Soldier by Fleurie  Counting Stars by OneRepublic I’m Born To Run by American Authors Hurt by Johnny Cash I’m still standing by Elton John Angels by Owl City Hope you enjoy!
1 comment
Read more 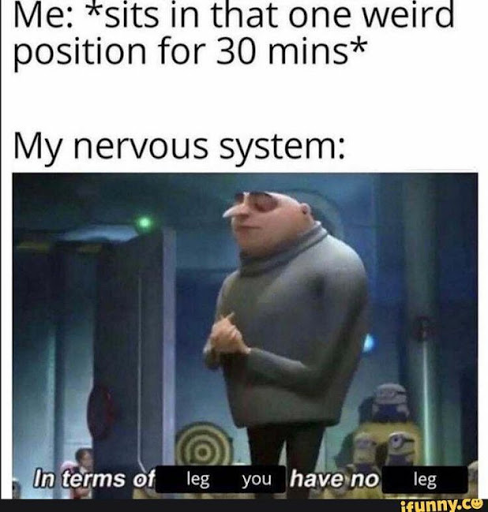 Caleb, Karissa, and Alayna here, with some of our favorite memes to add some humor to your day!
Post a Comment
Read more

October 18, 2020
Hello, Alayna here! First of all, I’d like to apologize on the behalf of my friends and myself for the blog being so slow lately. Everyone’s schedules are picking back up again and it’s hard to find time to write together! We’re working on a new scheduling system though so there should be more activity now. This testimony is particularly tardy- I’ve been (sort of) working on it for months, but I just couldn’t seem to get it right for so long! But ahem. This isn’t supposed to be an excuse post. I’d better quit the apologies for right now. The world is a pretty depressing place. Everywhere I look I see darkness. The word “2020” is even starting to become a joke! People are scared, lonely, and depressed. They’re finding their identity in how many social media followers they have or how perfect their lives seem on the outside. It’s so easy to get swept away in the tension and petty bickering and to not fight to keep your head above water and your eyes on Jesus. Why waste time and get bog
Post a Comment
Read more

How Covid-19 Is ACTUALLY Good For You

September 25, 2020
I know what you are thinking. How can Covid-19 be good for you? It is a virus...and one with a bad reputation!  Covid-19 is not good for us physically. But it is good for our souls.  We often get so caught up in living our own lives that we forget about our Creator. He uses events like Covid-19 for building our souls and helping us to trust in Him even more.  I have been read a book by Lee Strobel called The Case For Faith. Strobel discusses suffering with a friend. He wonders how a loving God can watch all the suffering going on in the world. Strobel's friend points out that Jesus suffered so much more than any of us ever will. Then his friend shared a story. He told how his young daughter had been accidentally run over by his wife. They were both heartbroken. It felt like the end of the world to them. But God helped them both through and strengthened them, and then blessed them with two more children. In the long run God made it work out. Though it hurt at first, he accepted that
Post a Comment
Read more

September 03, 2020
First of all, a quick disclaimer: This form of scripture reading is Catholic only in the sense that Ignatius of Loyola originally had the idea. No acceptance of any quirky Catholic beliefs is required for this! Anyway. I haven't written much on here, not since a meme post early on during quarantine, but I'm back in a more serious light. Today I want to discuss a different take on reading God's Word that even many Catholics don't know about, simply because it is an older form of prayer. So what is  Ignatian Contemplation? Ignatian Contemplation was developed, as I mentioned, by Ignatius of Loyola, who also founded the Society of Jesus, AKA the Jesuit Order. Ignatius believed that God can and does speak to us through our imagination as much as through anything else. The Gospels, are, in fact, littered with examples of Jesus using his listeners' imaginations to attempt to communicate ideas to them. All of His parables are fictions that use metaphors they understood mu
Post a Comment
Read more
More posts